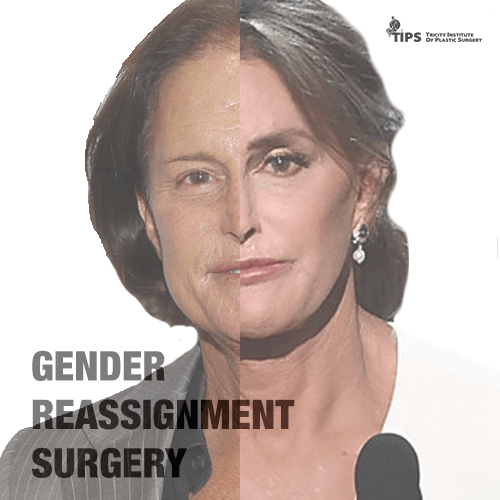 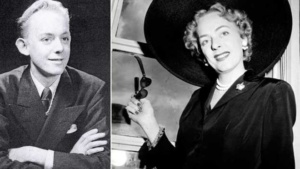 Back in 1952 a 27 year old George Jorgensen described himself as a woman trapped in a man’s body. 2 years later, he underwent gender reassignment surgery and it was considered as one of the first cases of transition from male to female gender.

“I wanted to find my true self”, said George Jorgensen, who changed his name to Christine Jorgensen post surgery.

In general, we are all in the pursuit of finding who we are. And we all aspire to fully resonate with who we are as a person. While gender may seem quite insignificant to heterosexuals, it can be quite a challenge for people whose gender does not align with their genitalia.

Men and women who suffer from gender dysphoria often describe the feeling of not belonging to their own body because their psychological being resonates with one sex but their body does not. It can be traumatic and psychologically challenging for anyone to live with such condition. Furthermore, society does not make it any easier for them in their search to find who they really are and who they want to be in terms of their sexual identity.

In order to help people with gender dysphoria, the World Professional Association for Transgender Health (WPATH) has come up to provide the highest standard of care for these individuals.

Gender reassignment surgery has proven to be one of the most efficient ways to provide such individuals, their peace of mind by aligning their body with their mind with the help of advanced surgical procedures. But it is not something to be taken lightly and requires intensive therapy and emotional preparation for years before actually opting for the surgery.

Doctors often require patients to live as their desired sex for a couple of years. For instance, those who biologically identify as male, but lean towards feminine character may dress the way a woman does, they may also change their names and refer to themselves using female pronouns. Females identifying as male do the reverse. Psychological assessment is a primary necessary to the surgery and there should be no loop hole surrounding it.

In addition to understanding the procedures and risk involved in the operation, there are a few necessary steps that need to be taken care of before the surgery, like:

Male to Female Transition are intended to make the patient’s body align with female gender. It includes various options like “Top” which encompasses breast augmentation (increasing the size of the breasts) and “Bottom” surgery that includes orchiectomy (removal of the testicles) and vaginoplasty (creating a vagina). 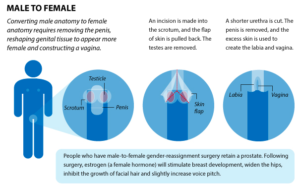 Some of the procedures are given below:

The aim of facial feminization surgery is to restructure a male face to give a more feminine look as a product. Surgical manipulation of the soft tissue and bones makes it possible to achieve a female facial appearance.

Procedures like Tummy tuck (abdominoplasty), Buttock lift (gluteal augmentation) and liposuction are used to give the body a more feminine shape.

A Tracheal Shave procedure is aimed at decreasing the size of the thyroid cartilage or the Adam’s apple to ensure a feminine look.

Feminization Laryngoplasty is a surgical procedure to change the patient’s voice to a higher pitch to ensure a female-like voice. The procedure involves shrinking the voice box and shortening the vocal chords to raise the pitch of the voice.

Orchiectomy in this case is a bilateral orchiectomy, which involves removal of both testicles. This stops the production of testosterone in the body to make transitioning from male to female considerably an achievable task.

Vaginoplasty, Vulvoplasty, Labiaplasty and Clitoroplasty are all genitalia inversion procedures. These procedures are aimed to give the patient their desired sexual genitalia.

Female to Male Transition are intended to make the patient’s body align with the male gender. Firstly, it includes “Top” Surgeries to remove the breasts and structure a more male-like chest. Second part is “Bottom” Surgeries like Metoidioplasty (to increase the length of the clitoris). And lastly Phalloplasty (to create a penis) and Scrotoplasty (to create a scrotum). 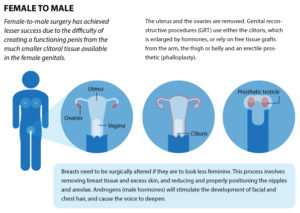 Some of the procedures are given below:

Breast Reduction surgery involves the process of decreasing the size and shape of breasts. The most common type is “Bilateral mastectomy with free nipple grafts” it removes all breast tissue including the milk ducts.

Pectoral implants are used to give the patient’s chest a well-defined and structured appearance as no amount of exercise can give ample results in Female to Male (FTM) Transsexuals.

For a Female to Male transition, there are two main parts in genital surgery. There is the removal of the existing female organs and the rebuilding of new male sexual organs.

Planning to get Gender Reassignment Surgery?

Female to Male (FTM) and Male to Female (MTF) transitions are very sensitive surgeries and require the patient to have a proper support system. Patients should also have great mental strength and efficient support system to get through such extensive surgeries.

A change in identity is not a simple transition, but a life-changing decision. So here at TIPS, we ensure that you will get the right support and guidance as you make this decision. Also, we just finished the PRIDE month of June to support people from the LGBTQ community. We at TIPS seek to provide pristine health care to our patients irrespective of their gender. Above all, our patient’s comfort and emotional health are our top priorities and we wish to help them align their body with their mind.